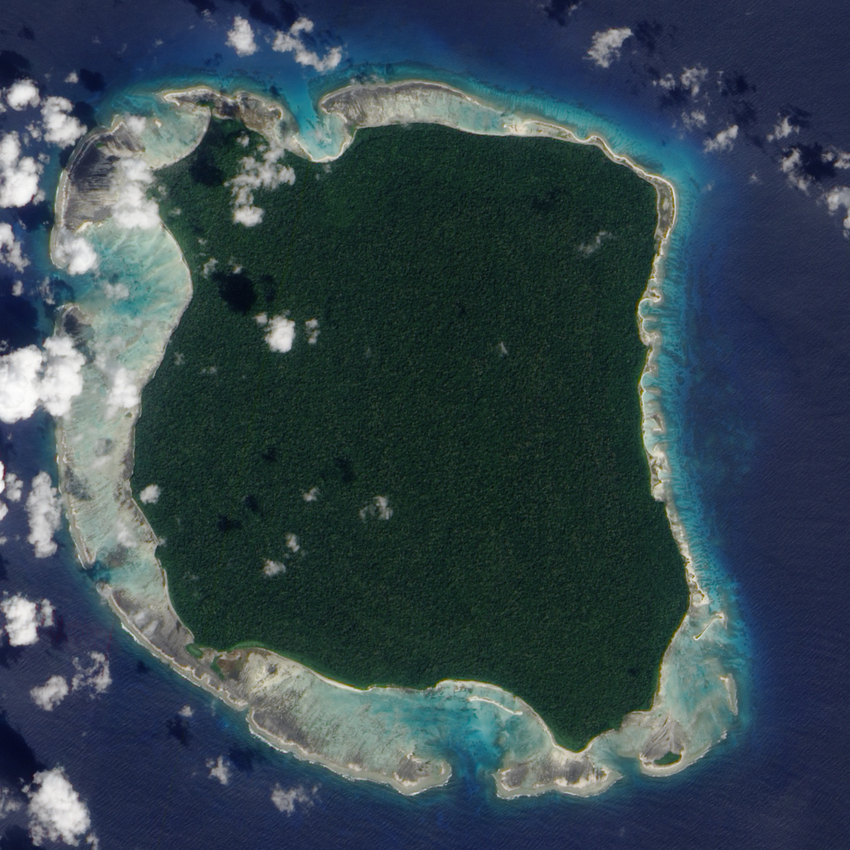 Five years ago this past December 26, a huge earthquake offshore of Sumatra, Indonesia, unzipped a 1,600-kilometer (994-mile) stretch of the sea floor, heaved it upward as much as 5 meters (16 feet), and unleashed devastating tsunamis that scoured coastlines of countries around the Bay of Bengal and the Andaman Sea. Hundreds of thousands of people died.

From space, the most visible evidence of the event included permanent uplift of islands and coral reefs along the rupture, including remote North Sentinel Island, pictured in this photo-like image from the Advanced Land Imager on NASAÕs Earth Observing-1 (EO-1) satellite from November 20, 2009. Surrounding the forested island is a perimeter of uplifted reef.

Compared to their bright white color in an image acquired in February 2005 (less than two months after the quake), the exposed reefs are duller in this recent image. The darkening may be because the reefs have since been covered with mud, sand, or algae, and because the tide appears to be higher at the time of the recent image.
The undisturbed appearance of the islandÕs forest might suggest it is uninhabited, but in fact, North Sentinel Island is home to one of the few remaining primitive tribes on EarthÑhunter-gatherer tribes which have had little or no contact with modern civilization. The Indian government, which oversees the Andaman Islands territory, prohibits visitors of any kind, and the islanders themselves violently rebuff any attempts at contact. Following the 2004 tsunami, the Indian Coast Guard flew a reconnaissance mission over the island; according to news reports and photos, men emerged from the forest and fired arrows at the helicopter, which did not attempt to land.
Date 31 December 2009
Source http://earthobservatory.nasa.gov/images/imagerecords/42000/42136/nsentinelisland_ali_2009324_lrg.jpg
Author NASA Earth Observatory image created by Jesse Allen, using data provided by the NASA EO-1 team. Caption by Rebecca Lindsey Das Satelitenbild au